There are three ESD Awareness Symbols defined in ANSI/ESD S8.1:

The ESD susceptibility symbol incorporates a reaching hand in a triangle with a slash through it and is used to indicate that an electrical or electronic device or assembly is susceptible to damage from an ESD event. Used to identify ESDS [ESD sensitive items] and that personnel should be grounding when unpackaging or handling that item. It is also referred to as the ESD sensitivity symbol or ESD warning symbol. 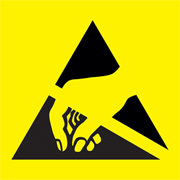 Application
The ESD susceptibility symbol should be used on assemblies and devices that have a sensitivity to ESD events. The symbol may be incorporated on a sticker used to close or seal ESD protective packaging to indicate that materials inside the package are ESD susceptible.

Format
The symbol is a reaching hand with defined fingers and fingernail, in a contrasting triangle with a slash in front of the hand.

Color
The choice of color for this symbol is arbitrary. The color red shall not be used because it suggests a hazard to personnel. The preferred color is a yellow hand and slash on a black background.

Note: Three Arrows In A Circle Symbol, per ESD Handbook ESD TR20.20 “Military organizations sometimes use MIL-STD-1285 for hardware marking and that document once required the use of the “three arrows in a circle” symbol. That symbol has been changed for consistency with industry marking to the “hand in triangle” ESD Susceptibility symbol”

The ESD protective symbol differs from the ESD susceptibility symbol, by the addition of an arc around the outside of the triangle and the omission of the slash across the hand and the triangle.

Color
The choice of color for this symbol is arbitrary. The color red shall not be used because it suggests a hazard to personnel. The preferred color is a yellow hand on a black background.

Note: In Europe per Packaging standard EN 61340-5-3 there is a requirement to place a letter under the triangle denoting the product’s primary ESD control function:

If the letter is “L” the primary ESD control property is low charging (antistatic); if “EPA” is meant to indicate the product is designed to be used in an ESD protected area.

This symbol is established to indicate an ESD common point ground, which is defined by ANSI/ESD-S6.1 as "a grounded device where two or more conductors are bonded." 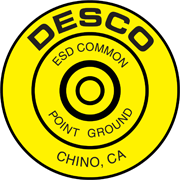 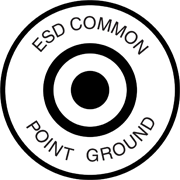 Format
This symbol consists of a bold outer circle inside of which are the words, ESD COMMON POINT GROUND, in bold type. Inside that are two thick contrasting circles and one thick circle that may fill the center or extend to the center where a snap, plug or other fastener may be connected.

Color
The choice of color for this symbol is arbitrary but black or white on green is suggested. The color red shall not be used because it suggests a hazard to personnel.

Note: in Europe they used for the same purpose the Earth Bonding Point symbol:

Up to Date
Knowledge 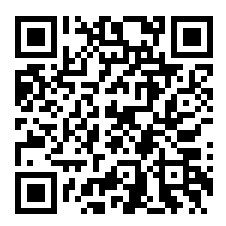